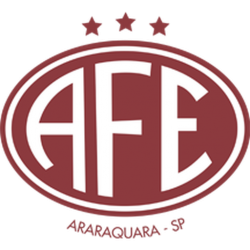 Associação Ferroviária de Esportes Futebol Feminino, commonly known as Ferroviária or Ferroviária/Fundesport, is a professional women's association football club based in Araraquara, São Paulo state, Brazil. Founded in 2001, they have won the Campeonato Paulista on four occasions. In 2014 they secured a double of the Campeonato Brasileiro and the Copa do Brasil. The club is a three-way collaboration between the Ferroviária men's football club, the local authority's sports and leisure department and the charitable arm of the Caixa bank.

Estádio Dr. Adhemar de Barros, usually known as Estádio Fonte Luminosa, or just Fonte Luminosa, is a football (soccer) stadium in Araraquara, Brazil. The stadium has a maximum capacity of 25,000. It was inaugurated in 1951. The stadium is owned by the Araraquara City Hall, and its formal name honors Adhemar Pereira de Barros, who was the governor of São Paulo state from 1938 to 1941, 1947 to 1951, and 1963 to 1966. Associação Ferroviária de Esportes usually plays their home matches at the stadium. Fonte Luminosa means Luminous Fountain.