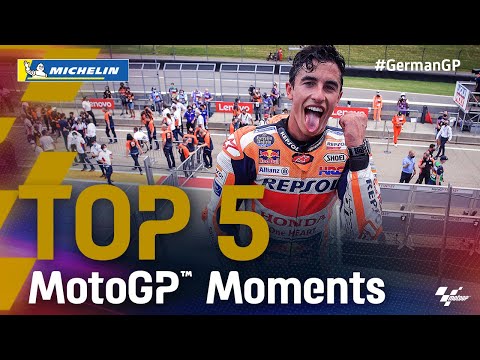 The German motorcycle Grand Prix, first held in 1925, is since 1952 part of the Grand Prix motorcycle racing World Championship.
The first two Großer Preis von Deutschland races were held at Berlin's AVUS before moving to the new the purpose-built Nürburgring which was used in its full 28 km configuration. No GP was held in 1932, in 1933 the AVUS was given another try, and since 1934, public roads near and through Hohenstein-Ernstthal in Saxony were in use, initially without the name Sachsenring which had been used elsewhere. It was adopted in 1937.
In 1998, after having become rather unpopular first at Hockenheim and then at Nürburgring due to the style of the promoters, the German motorcycle Grand Prix moved to new promoters, and to the shortened purpose-built Sachsenring where it became a sell-out event since.
The 2020 race was cancelled due to the outbreak of COVID-19.

Honda's Marc Marquez secured a first MotoGP victory since recovering from a career-threatening broken arm, with an emotional win at the German Grand Prix.
The Spaniard, a six-time MotoGP world champion, made his return this season after breaking his arm at the Spanish Grand Prix last July.
It was his first victory since 2019, and his 11th straight career win at the Sachsenring circuit.