Jordan Bernard Rossiter (born 24 March 1997) is an English footballer who plays as a midfielder for Fleetwood Town, on loan from Rangers.
Rossiter joined his local side Liverpool when he was 6 years old and first represented the academy at U6 level. He made his debut for Liverpool U18s on his 15th birthday. Still aged 15 he made his U19 debut side in a NextGen series match against Inter Milan, during the game ex-Liverpool striker Robbie Fowler said Rossiter was a talent comparable to Liverpool captain Steven Gerrard. For the 2013–14 season Rossiter, then 16, became a permanent fixture of Liverpool's U21 Premier League side and at the end of the season won Liverpool's Academy Player of the Year award. In September 2014, Rossiter was named as captain of Liverpool under-19s for the 2014–15 UEFA Youth League.
During the 2013–14 season Rossiter trained regularly with the first team squad and was named on the bench for the first time for a Premier League match against Chelsea on 29 December 2013. He also claimed a place on the bench in the New Years Day victory against Hull.
On 23 September 2014, Rossiter made his first team debut aged 17 in a League Cup third round match against Middlesbrough, scoring his first goal for the club with a low drive from 30 yards in the 10th minute to become Liverpool's second youngest goalscorer behind Michael Owen. On 28 October, Rossiter was an unused substitute in the next round of the League Cup in a match against Swansea which Liverpool won 2-1 thanks to the late header from Dejan Lovren in injury time. He also made the bench in the Reds' 1-0 league victory over Sunderland at the Stadium of Light on January 10. He was an unused substitute in Liverpool's 1-1 draw against Chelsea in the League Cup semi final 1st leg on January 20, 2015. On 2 February 2015, Rossiter suffered an ankle injury in a FA Youth Cup game against Birmingham City that left him on the sidelines for several weeks. 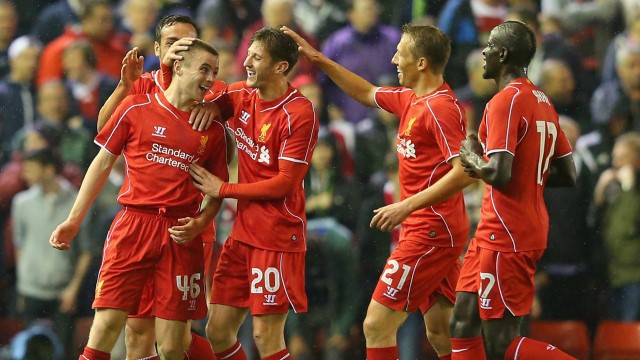