Sergio Germán Romero (born 22 February 1987) is an Argentine professional footballer who plays as a goalkeeper for Italian Serie A club Venezia and the Argentina national team.

He made his debut with Racing Club in the Argentine Primera División in 2007 and then transferred to Dutch club AZ at the end of the season. He won the Eredivisie in 2009 and two years later joined Sampdoria.

A full international with over 70 caps since 2009, Romero has represented Argentina at two World Cups and as many Copa América tournaments, finishing as runner-up once in each competition. He also was part of their team which won gold at the 2008 Olympics.

Romero represented Argentina at the 2007 South American Youth Championship in Paraguay and at the 2007 FIFA U-20 World Cup in Canada where on 8 August 2007 Romero was first included in the Argentine selection for a friendly match against Norway and against Australia, which Argentina also went on to win. He replaced injured Oscar Ustari at the 2008 Summer Olympics football tournament.

Romero was called up to the full senior side by then coach Diego Maradona debuting on 9 September 2009 in a 0-1 FIFA World Cup qualifier loss against Paraguay and playing in the win against Uruguay in Montevideo that saw Argentina qualify for the 2010 FIFA World Cup. He played in all five of Argentina's World Cup matches which ended at the quarter-final stage.

Romero was part of Sergio Batista's 2011 Copa América squad in which Argentina the hosts lost to Uruguay on penalties in the quarter-finals. He retained his position as number one choice under new coach Alejandro Sabella for the ongoing 2014 FIFA World Cup qualifiers.

Romero was Argentina's starting goalkeeper at the 2014 FIFA World Cup. In the semi-final, he earned himself Man of the Match by saving kicks from Ron Vlaar and Wesley Sneijder as Argentina defeated the Netherlands 4–2 in a penalty shootout to reach the 2014 FIFA World Cup Final. On 11 July, Romero was named on the three-man shortlist for FIFA's Golden Glove award for the tournament's best goalkeeper due to his performances that led his team to the final.

At the 2015 Copa América, Romero saved from Juan Camilo Zúñiga in the penalty shoot-out at the end of Argentina's goalless quarter-final against Colombia in Viña del Mar; although three takers did not score their penalties, this was the only save.

Despite being 6 feet 3 inches (1.91 m) tall, Romero is nicknamed "Chiquito" as he is relatively short compared to his brothers, in particular his professional basketball-playing brother Diego. He is married to fellow Argentine Eliana Guercio, with whom he has a daughter. 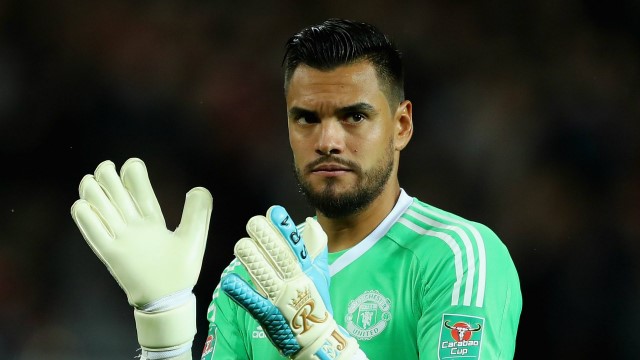