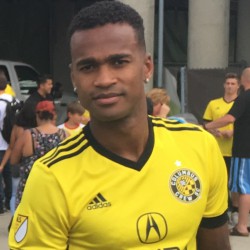 Ola Williams Kamara (born 15 October 1989) is a Norwegian professional footballer who plays for LA Galaxy in Major League Soccer. He plays as a striker, and has also played for Stabæk, Hønefoss, Strømsgodset, Molde, Austria Wien, TSV 1860 München, and Columbus Crew SC. Kamara’s father is from Sierra Leone, and his mother is norwegian. He has represented Norway at the youth and senior international levels.

Career
Club
Early career
His father moved from Sierra Leone to Norway as a refugee. Kamara was born and raised in Oslo. When Kamara was one year old, his parents chose to seek help in raising him, and Kamara spent every second weekend, holidays and birthdays with a foster care family. He played for Frigg during his youth, and made his debut for the first-team in the Second Division at the age of 15. Kamara moved to Stabæk at the age of 16, and soon became an integral part team of Stabæk's youth team. He scored the match-winning goal in the final against Viking when Stabæk won the Norwegian Youth Cup in 2008.

Stabæk
Kamara made his debut for Stabæk in Tippeligaen at the age of 16, when he replaced Somen Tchoyi as a substitute in the 2–2 draw against Lillestrøm on 1 October 2006. The next season, he joined the First Division side Hønefoss on a short-term loan, as a replacement for the injured Lars Lafton and Kenneth Di Vita Jensen. Kamara played three matches for Stabæk in 2008, enough to earn him a winners-medal, when the team won Tippeligaen. Kamara's contract expired after the 2008 season, and he wanted to find a new club, even though Stabæk wanted to renew his contract, because he found it too hard to compete with Daniel Nannskog and Veigar Páll Gunnarsson for playing time. After unsuccessful trials with Reggina and Sandefjord, Kamara had gotten an offer from the 2. Divisjon side Bærum but on the last day of the transfer window ahead of the 2009 season, he signed a two-year contract with the Tippeligaen side Strømsgodset. As his wage was only 135,000 kr per year, Kamara had to move back home to his mother.

Strømsgodset Toppfotball
Kamara was mostly back-up for Marcus Pedersen in his first season with Strømsgodset. After Pedersen moved to Netherlands in August 2010, Kamara started to play regularly alongside Jo Inge Berget. Kamara scored seven goal in 25 matches in the 2010 season, and became joint top goalscorer for Strømsgodset alongside Pedersen. Kamara also scored goals in the semifinal and the final when Strømsgodset won the 2010 Norwegian Football Cup. Kamara signed a new two-year contract with Strømsgodset in December 2010, lasting till the end of the 2012 season.

Kamara continued to score goals in the beginning of the 2011 season, and when he scored against Odd Grenland on 10 April 2011 he had scored in six home-matches in a row. He became Strømsgodset's top goalscorer in the 2011 season, with 10 goals. Strømsgodset signed Péter Kovács and Adama Diomande ahead of the 2012 season, and Kamara was expected to play less than he had done the last two seasons, but was however playing regularly on the left wing during the season and was a great contributor to the team. After only scoring one goal in the first half of the season, Kamara scored three goals on Lerkendal Stadion in the 3–3 draw against Rosenborg on 24 June 2012. Kamara scored another hat-trick one week later, when Hønefoss was beaten 5–0. In the 5–0 victory against Fredrikstad on 27 July 2012, Kamara scored one and assisted three other goals. Kamara also scored the match-winning goal against Rosenborg on 5 November 2012, which eliminated Rosenborg title-chances. At the end of the season, Strømsgodset finished second behind Molde, and won their first league-medals since 1997.

Kamara's contract with Strømsgodset expired after the 2012 season.

1860 München
On 20 January 2013, Kamara signed for SV Ried, but was immediately loaned out to TSV 1860 München on a six-month contract until the end of the season 2012–13 season with an option to extend the deal to two years. After the season, he went on loan to Strømsgodset.

Strømsgodset Toppfotball
The loan spell at his old club Strømsgodset was very successful. He scored 12 goals in 14 matches, including a hat-trick in his first match, and thus played a vital role in the team that went on to win the league.

Austria Wien
Kamara signed for Austria Wien in January 2014 but scored only 2 goals in 23 matches.

Molde FK
On 28 January 2015, Molde FK announced that they had signed Kamara on loan for the 2015 season, with an option to buy the striker.

On 4 August 2015 he scored a goal in 3-3 draw with Dinamo Zagreb in the second match of Third Qualifying Round UEFA Champions League.

Columbus Crew SC
On 4 February 2016, Kamara signed with Columbus Crew prior to the start of the MLS season. Terms of the transfer were not disclosed. His 2016 base salary was $425,000.

Kamara made his club debut 9 April 2016 in a 2-0 loss to Montreal Impact, replacing Kei Kamara in the 70th minute. He started his time with Crew SC as the backup to Kei Kamara, but jumped into the starting role when Kei was traded to the New England Revolution. His first goal for the Crew was against Real Salt Lake on 28 May, adding two more to complete the hat trick. Ola ended his first season outside Europe with 16 goals and 2 assists in 25 MLS appearances.

LA Galaxy
After two successful seasons with Columbus, in January 2018 Kamara was traded to LA Galaxy in exchange for Gyasi Zardes and $400,000 in targeted allocation money.

International
Kamara was selected for regional teams (Norwegian: Kretslag) in Oslo at the age of 15, and later represented Norway at under-16 and under-17 level. He has also represented the Norway under-23 national football team. Kamara made his debut for the Norwegian national team when he replaced Daniel Braaten in the 61st minute of the World Cup qualifier against Slovenia on 11 October 2013. In the match against Iceland four days later, Kamara made his starting-debut on his 24th birthday and played a total of 55 minutes.