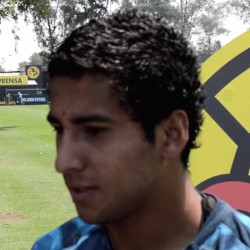 Cecilio Andrés Domínguez Ruiz (born 11 August 1994) is a Paraguayan professional footballer who plays as a left-winger and forward for Major League Soccer club Austin FC and the Paraguay national team.

Club career
Sol de América
Born in Asunción, Domínguez was a Sol de América youth graduate. On 20 November 2011, aged 17, he made his first team – and Primera División – debut, coming on as a late substitute in a 2–1 home win against Guaraní.

On 18 December 2011, in only his second appearance, he scored his professional goal by netting a last-minute equalizer in a 2–2 home draw against Cerro Porteño. He then became a regular starter from the 2012 season onwards.

On 1 July 2014, Domínguez was loaned to Nacional for the remainder of the 2014 Copa Libertadores. On 15 August, after the club was knocked out, he returned to his parent club.

América
On 14 January 2017, Mexican side Club América signed Domínguez on a four-year contract. He made his debut abroad fourteen days later, starting and scoring the only goal of the match in a Liga MX home win against Veracruz.

Independiente
On 24 January 2019, Domínguez joined Argentine club Independiente on a deal worth US$6 million, becoming the club's all-time record signing.

Austin FC
On 24 August 2020, Domínguez was announced as the first Designated Player of the newly formed MLS franchise Austin FC, set to make its competitive debut in 2021. On 31 August 2020, it was announced that Domínguez would spend the remainder of the season on loan with Guaraní in the Paraguayan Primera División.

On 24 April 2021, Domínguez scored two goals for Austin FC against the Colorado Rapids in the club's first ever victory.

International career
After playing for Paraguay at under-17 and under-20 levels, Domínguez was first called by the full side on 2 October 2014, for friendlies with South Korea and China. He made his full international debut eight days later, replacing Derlis González in a 2–0 loss against the former in Cheonan.