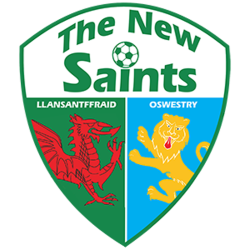 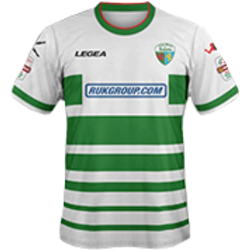 The New Saints of Oswestry Town & Llansantffraid Football Club also known as the New Saints or TNS is a full-time-professional Welsh football club representing Llansantffraid-ym-Mechain in Powys, Wales and Oswestry in Shropshire.– the two places are 8 miles (13 km) apart. They play in the Welsh Premier League, which they have won a record eleven times – including the past six seasons.
Founded in 1959 as Llansantffraid F.C., from 1997 to 2006, the club was known as Total Network Solutions F.C. after its sponsor. In 2003, it merged with Oswestry Town F.C. and three years later it adopted its current name.
TNS play at Park Hall in Oswestry after moving there in 2007 from the Recreation Ground in Llansantffraid. Park Hall accommodates 2034 of which 1,000 are seated spectators and there are plans to upgrade the ground to 3,000 capacity in the future.
The club was formed as Llansantffraid F.C. to represent the tiny border village of Llansantffraid-ym-Mechain (population: 1,000) in 1959, and played at the Recreation Ground.
They first tasted competitive football in the Montgomeryshire Amateur Football League (then the fourth level of the Welsh football league system), winning the championship seven times. At the end of the 1989–90 season they were elected to the Central Wales League (now the Mid-Wales League) but their stay was brief, winning promotion to the Cymru Alliance as runners-up on their first attempt. Llansantffraid's meteoric rise continued and in 1992–93 they gained promotion to the League of Wales, now the Welsh Premier League, as champions and won the Welsh Intermediate Cup (formerly the Welsh Amateur Cup). Park Hall Stadium is a football stadium in Oswestry, Shropshire, England. It was opened by Shropshire County Council in 1993, originally as the home of Oswestry Town. In 2003, Oswestry Town merged with Total Network Solutions F.C. (TNS) to form current Welsh Premier League team The New Saints. The newly merged club moved away from Park Hall to Total Network Solutions' Recreation Ground.
Following a short period of abandonment, Park Hall was purchased from the council by Mike Harris with a view to redevelopment and The New Saints moving back to the ground. The New Saints started to use Park Hall as their regular home ground again in 2007 and the ground was further improved so that it was able to host matches in the UEFA Champions League and UEFA Europa League. It has since been used to host youth international fixtures for both England and Wales while also hosting Non-League football for community teams in Oswestry.