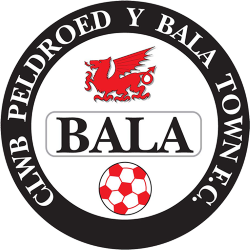 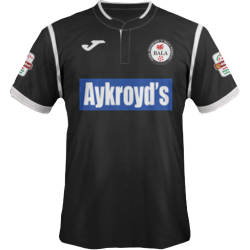 Bala Town Football Club (Welsh: Clwb Pêl-droed y Bala) are a Welsh football team from Bala, Gwynedd, who play in the Welsh Premier League. They play their home games at Maes Tegid.
Although the current Bala Town was formed in 1880, there is record of a football club competing in the 1877–78 Welsh Cup, losing to Corwen after two replays. After Bala North End, Bala South End and Bala Thursday's merged, Bala Town's first available league status record is playing in the Welsh National League North Division 2 East in 1921–22 season. Bala Town moved to their current home, Maes Tegid, in the early 1950s and joined the Wrexham Alliance in 1950, however Bala Town had to wait for more than a century until they were promoted to the second tier of Welsh football, into the Cymru Alliance at the end of the 2003–04 season. After only four seasons in the Cymru Alliance, Bala Town sealed promotion to the Welsh Premier League. In the 2014–15 season, the Lakesiders finished second, their highest ever league position, thus qualifying for the 2015–16 UEFA Europa League. Bala Town have played at Maes Tegid in Bala since the 1950s. For European matches they use Rhyl's Belle Vue stadium due to UEFA stadium regulations.