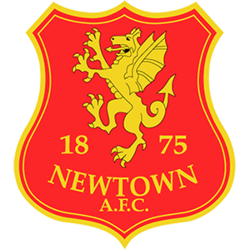 Newtown Association Football Club is a Welsh football club based in Newtown, Powys, which plays in the Cymru Premier. Newtown are one of only two clubs that can claim unbroken membership of the league since its formation in 1992, with the other club being Aberystwyth Town.
The club was founded in 1875 as Newtown White Stars, and was one of the founder members of the Football Association of Wales. Newtown White Stars, which appeared in the first ever Welsh Cup match on 13 October 1877, is believed to have merged with Newtown Excelsior to form the current Newtown AFC in time to be Welsh Cup finalists in 1885 and 1888. The club plays at Latham Park, Newtown, which accommodates 5,000 spectators. Latham Park is a multi-purpose stadium in Newtown, Wales. It is currently used for football matches and is the home ground of Newtown F.C.. The stadium holds 5,000 people and is named after former Wales international footballer George Latham.
Over the years the club have played at a number of sites but the officers and general committee of the late 1940s took the decision to purchase and construct a new playing headquarters at a site to be called Latham Park. This decision was a far-sighted one, and the present board officers, committee, supporters and players owe much to their counterparts of some 60 years ago.