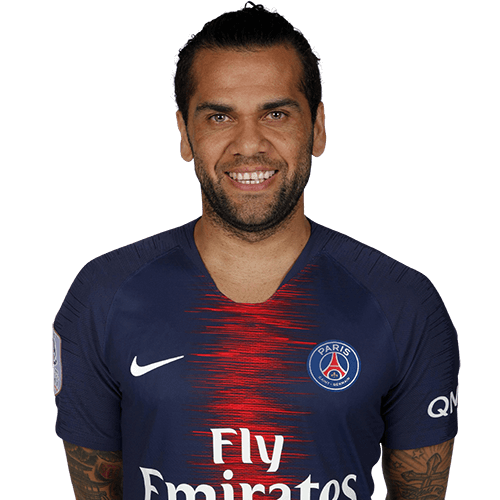 Daniel Alves da Silva (Brazilian Portuguese: ; born 6 May 1983), known simply as Dani Alves, is a Brazilian professional footballer who plays as a right-back for São Paulo FC and the Brazil national team. Considered one of the greatest right backs of all time, Alves is the most decorated player in the history of football with 44 trophies and the second-most decorated defender of all time in European competitions.

Before joining Barcelona in 2008, Alves spent a successful six-year spell with Sevilla, winning two UEFA Cups and the Copa del Rey with the Andalusian side. He joined Barcelona for €32.5 million, becoming the third-most expensive defender of all-time. He won the treble in his first season with the club and in the next season, won the Supercopa de España, UEFA Super Cup and the FIFA Club World Cup. Additionally, he helped the club to clinch another two Supercopa de España, five La Liga titles and two UEFA Champions League titles in the years that followed. In 2016, Juventus signed Alves on a free transfer. Alves won the 2016–17 Serie A title and 2016–17 Coppa Italia in his only season with the side, also reaching the Champions League Final. In 2017, Alves joined French side Paris Saint-Germain on a free transfer, winning a domestic treble in his first season, followed by another league title the following season. In 2019, he returned to his home country, joining São Paulo. Two years later, Alves won his first title with the club, winning the Campeonato Paulista.

A full international for Brazil since 2006, Alves was included in their squads for two FIFA World Cups and five Copa América tournaments, winning the 2007 and 2019 editions of the latter competition, as well as the 2009 and 2013 FIFA Confederations Cups.