A prep-to-pro, James played high school basketball for St. Vincent–St. Mary High School in his hometown of Akron, Ohio, where he was heavily touted in the national media as a future NBA superstar. He joined the Cleveland Cavaliers in 2003 as the first overall draft pick. James quickly emerged as a league star and concluded his first season by winning the NBA Rookie of the Year Award. He would go on to establish himself as one of the premier players in the NBA with multiple accolades, including being given the NBA Most Valuable Player Award in 2009 and 2010. However, after falling short of the championship expectations set by the media, fans, and himself, James departed Cleveland in 2010 as a free agent to sign with the Miami Heat. This move was announced in an ESPN special titled The Decision, and is one of the most controversial free agent decisions in American sports history.

In Miami, James won his first NBA championship in 2012, and followed that with another title a year later. He was named league MVP and NBA Finals MVP in both championship years. In 2014, James opted out of his contract with Miami after four seasons to re-sign with the Cavaliers. In 2016, James led the Cavaliers to their first NBA championship by defeating the Golden State Warriors to end Cleveland's 52-year professional sports title drought. In 2018, he opted out of his Cleveland contract to sign with the Lakers.

James played high school basketball at St. Vincent–St. Mary High School in his hometown of Akron, Ohio, where he was highly promoted in the national media as a future NBA superstar. After graduating, he was selected by the Cleveland Cavaliers as the first overall pick of the 2003 NBA draft. James led Cleveland to the franchise's first Finals appearance in 2007, losing to the San Antonio Spurs. In 2010, he left the Cavaliers for the Miami Heat in a highly publicized ESPN special titled The Decision. James played four seasons with the Heat, reaching the Finals all four years and winning back-to-back championships in 2012 and 2013. In 2013, he led Miami on a 27-game winning streak, the third longest in league history. Following his final season with the Heat, James opted out of his contract and returned to the Cavaliers. Behind his leadership, Cleveland immediately advanced to two consecutive Finals against the Golden State Warriors, winning the championship in 2016 to end Cleveland's fifty-two year professional sports title drought.

Off the court, James has accumulated considerable wealth and fame from numerous endorsement contracts. His public life has been the subject of much scrutiny, and he has been ranked as one of America's most influential and popular athletes. He has been featured in books, documentaries, and television commercials. He also hosted the ESPY Awards, Saturday Night Live, and appeared in the 2015 film Trainwreck. 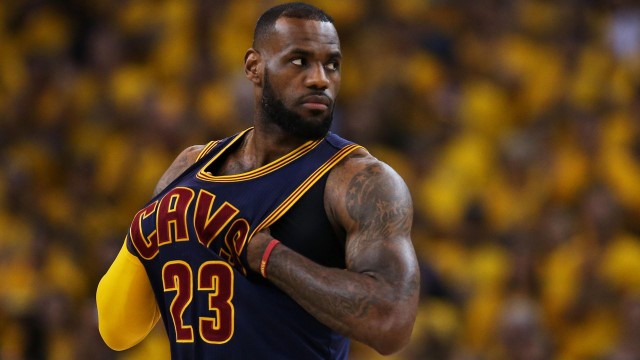